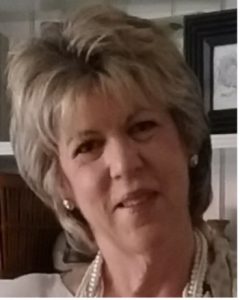 Longtime WIN member and former WIN President Mary Westerman first arrived in Florence in 1971 after graduating from U C Boulder, to take part in a summer school session hosted by Sarah Lawrence. When she saw the artworks damaged by the city’s great Flood of 1966 being restored in the labs of the Opificio at Fortezza da Basso, she realized she had found her calling. “It just clicked,” Westerman says.

Something else clicked that fateful summer in Florence-Mary met her future husband, Eugenio Bulgarella, and they married five years later. They  have been married ever since, and raised their daughter Elena, who now lives in Chicago, here in Florence.

After earning her M.F.A. in Painting Conservation from Rosary College Graduate School of Fine Art’s, at Villa Schifanoia, (now part of the EUI campus), Mary pursued her particular interest in textiles and historical costumes with an internship at the Victoria and Albert Museum in London and further professional training at the Canadian Conservation Institute. But her heart was in Florence, where in the 1980s she helped set up the costume conservation lab and costume display areas  at the Pitti Palace. Mary’s pioneering costume conservation  work  and long career in Florence  has focused on some very prestigious projects, including the restoration of Napoleon’s Coronation clothes when he was crowned King of Italy, now on view in Florence at the Stibbert Museum. She headed a decade long project effort to restore the actual burial clothes of  Medici Granduke Cosimo Primo, his wife Granduchess Eleonora di Toledo and  their son Garcia. “Those clothes came out of the tombs as rags” Mary says, but stitch by stitch, they were painstakingly restored and are now on permanent display in the Costume and Fashion Museum of the Pitti Palace.

When Mary stopped conservation lab work  she doubled down on her efforts to further communication and knowledge in the world of costume conservation by  organizing a series of biennial “Costume Colloquiums in Florence” which concluded with a 7th edition in 2020. Mary’s sparkly personality, her savvy and her professional contacts all served to make the costume colloquiums a rousing international success. Mary now spends her time travelling between Florence and Chicago, is happy to join our meetings on Zoom and even happier when she is able, to see everybody in person! In Florence for our May meeting, Mary shared lots of stories about the early years of our Network, and is so proud and pleased that we are still rocking on!

*Parts of this bio are paraphrased from an interview of Mary by Rosanna Cirigliano, that Mary generously shared with us