by Donna Scharnagl and Liz Wicks 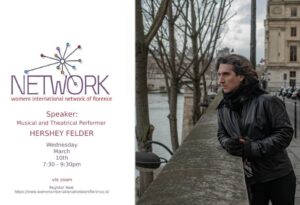 Named to Time Magazine’s 2016 Top 10 Plays and Musicals, Hershey Felder has played at some of the world’s most prestigious theatres, consistently breaking box office records. American Theatre Magazine has said, “Hershey Felder is in a category all his own.”

Hershey tickled a few ivories, in between entertaining stories of how he carved out his own special category in the world of entertainment. His method of telling stories, while bringing emotion and laughter to the stage was front and center as he told about his creative method, his move to Florence, and stories of his life before and during  COVID.

Hershey Felder is a world-class musician, writer, and theatrical performer, a true Renaissance man, so he and Florence make a perfect fit.

Hershey is, above all, simply a wonderful storyteller, which is why his performances sparkle with life. I think my favorite story he told us was about his piano because it gave us a glimpse of his life on the road in the US and also his new life in the Renaissance city he now calls home. Anyway, he had this wonderful, expensive, grand concert piano, which traveled with him across the US as he moved from city to city over the years, giving his one-man performances night after night, for thousands of nights on end (well over 6,000 performances).

One humid July night in Florida, the piano gave up, just wouldn’t stay in tune, and Hershey decided it was time to retire it for a while. So he put it in storage and went on with his life, using pianos he would rent in each new location. When he settled in Florence a few years later, he sent for his piano and was devastated to find out that the man who ran the storage unit was a crook and had illegally sold it. So Hershey had to get a new grand piano, and someone told him that there was a beautiful piano for sale in Impruneta, in a villa that once belonged to Leon Battista Alberti.

Eager to see both the villa and the piano, Hershey met with the owner, a former concert pianist. She told him all about her long career while her husband sat silently by her side on the couch. Thinking to involve her husband in the conversation Hershey asked him, “what did you do, Cesare, while your wife was away touring” Cesare modestly replied, “well, I ran La Scala in Milan”! Turns out he was Cesare Mazzonis, famous artistic director of La Scala Opera House in Milan and then Maggio Musicale in Florence., Hershey of course bought their piano, they became great friends, and because of this serendipitous connection, Hershey has been able to bypass a lot of red tape for filming his productions here in Italy.