Why does he do that? Working with Perpetrators of domestic violence 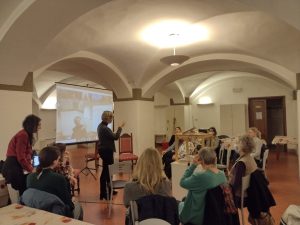 November 25 marked the 11th International Day for the Elimination of Violence Against Women, a day marked around the world with marches, slogans, and promises of change.

Earlier in the month, WIN members had the opportunity to hear from Dr. Alessandra Pauncz, executive director of Work With Perpetrators European Network (and daughter of WIN member Elizabeth Lutz). A psychologist by training, Pauncz has worked in many areas in the field of domestic violence for 20 years and published numerous books and articles on the subject. She has advocated and worked for victims of domestic violence as a shelter worker, psychologist, researcher, manager, trainer, and in fund and conscious raising at a local, provincial, regional, national and European level.

One woman every three days is killed in Italy by partners or ex-partners, especially when they decided to separate, she said. The numbers are similar in other countries.

The violence is physical, psychological, and causes significant financial harm. Exposure to violence when they are young teaches men that it is acceptable – and society reinforces that anger is the only acceptable emotion for men – and then they use violence as adults to stay in control.

Pauncz has done a lot of that thinking. It led her to establish the first perpetrator program in Italy (CAM – Centre for abusive men) and set up the national Italian network for perpetrator work (Relive).

And while she has sought to understand the men who commit violence and how to help them, she is not overly sympathetic to perpetrators of domestic violence. Pauncz wants them held accountable. But the problem is bigger than any one man’s behavior, she said.

“I’m pissed at the system,” Pauncz said. Describing inequal structures of power, she said they permit “men to assert the kind of entitlement and privilege that allows the violence to happen and then does not hold men accountable for it.”

Only 10 percent of women ever report domestic violence, she said. While there are many reasons for that, one is that they don’t find a sympathetic or helpful legal system. Of those men that do face charges, only 30 percent ever face consequences.

She criticized anti-violence campaigns and the media for perpetuating stereotypical and sexualized images of violence. For example, the typical image in these efforts is of an obviously bruised, but rather put together and often white, woman. That doesn’t reflect reality. Few victims, she said, ever show visible signs of physical violence. Often the violence, or threat of violence, is psychological. And these campaigns never feature male perpetrators. They are “men without a face,” she said; unseen monsters.

[This author also notes how violence is often reported using passive language. For example, we say “Women are abused,” not “Men abuse women.” See the fourth paragraph of this article which should be rewritten to read: “Partners and ex-partners kill a woman every three days in Italy.”]

All of this allows us to neither see the violence nor recognize the perpetrator. This translates into many more shelters for women than programs designed to hold men accountable for what they do.

“We need to change the language. We need to shift the paradigm. We need to name it when we see it,” she said. “Our primary focus must be the safety of women, but we must work on the men.”

Her program requires men to sign a contract which, among other things, commits them to ending the violence immediately. They also meet in group counseling ‘accountability circles” with male counselors. And partners evaluate the men’s behavior before and after the program. Few men come under their own volition however – the majority are court-ordered to attend.

But moreover, we need to change the attitudes and behavior that permit a culture of violence and that blames women for that violence. And not only do we need to start with men, it needs to begin with children who live what they see.

Women “have the right to choose to be in a relationship with anyone and not be beaten up,” she said. And “we need male allies who question their privilege and do a little more.”

Pauncz told WIN members that she will soon be launching a local campaign to collect stories of patriarchal/male violence and how is it also damaging in the lives of men. Stay tune for information on how you can get involved. 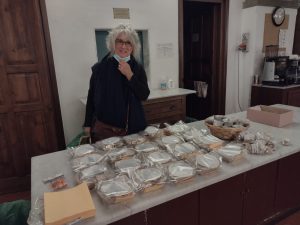 We would also like to thank Cindy Harding Nannarelli for donating her time to prepare a lovely spread for us.