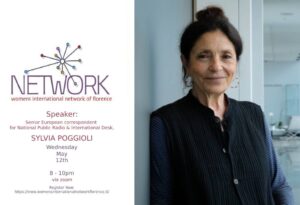 Bright and fearless, she acted as war correspondent in the Balkans, during the disintegration of Yugoslavia.

Sylvia Poggioli, senior European correspondent responsible for popular broadcasts of America’s National Public Radio (NPR) spoke to us on 12 May. Bright and fearless, she acted as a war correspondent in the Balkans, during the disintegration of Yugoslavia. She covered the violence in Slovenia, Croatia, Bosnia, and Kosovo in the late 1980s and early 1990s; in those skirmishes, she says, ‘ethnic cleansing was the main issue’ and, of course, civilians, the target.

‘We would … cross enemy lines, bribing Serbian thugs with cigarettes. We were the first to discover the detention camps in northern Bosnia, where so many prisoners were being held. Though briefly taken hostage, Sylvia and colleagues went on to win the prestigious Peabody Prize for their reporting.

As a representative of death and danger in the workplace, Sylvia learned that female correspondents (she was one of many) were in a far better place than their male counterparts to speak to the victims of rape, an ugly, long-practiced strategy of warfare. In fact, for the first time ever, rape was labelled as a war crime during the Yugoslav War Crimes Tribunal.

Though one might expect women to play less important roles in situations of perilous conflict, Sylvia is witnessing how females are making huge achievements against the ubiquitous glass ceiling that creates a barrier. NPR is staff by many women, she notes. Journalism is seeing more and more women in positions of management; the new editor of the Washington Post is Sally Buzbee, who leads the newsroom.

Women inspired to become journalists should read history books and learn languages, Sylvia stated in answer to a query about this.

She shared inspiring moments of her career. She wrote a story about the ‘extraordinary’ American Donna Leon, author of the well-loved Italian detective series featuring Commissaro Guido Brunetti. Leon, who also lectures at a Venetian university near her home, will not let the book be published in Italian for fear that she would lose her anonymity. Six years ago she reported about Francesco Lottero, a musicologist who uncovered the scores of Nazi (and Japanese ) prisoners during the Second World war. Lottero performs concerts of their music all over the world and was recently honoured for his passionate work by the US Holocaust Museum. Sylvia and colleagues accompany Pope Francis on his travels, notably, on a trip to Iraq to visit Christian communities devasted by ISIS: these peoples are amongst the oldest such enclaves in the world. The Pope’s ‘great interest is in the periphery of the Catholic world’, to acknowledge the forgotten ‘Christian minorities’. ‘An attentive and careful listener,’ he speaks fluent Italian (and not good English), Sylvia notes.

Sylvia worked intensively during the early months of the current pandemic, with Italy on the front page as the world’s forerunner of Covid-19 virus cases. This year she has slowed down somewhat, working part-time and travelling much less. She is assigned work and generates her own stories. Every day as a journalist is different. It would be impossible to be a mother as well as a foreign correspondent, Sylvia answers, when someone asks.

Based in Rome*, ( she could not imagine living in the US again but usually travels there biannually), She reads the Corriere della Sera and La Repubblica, the latter of which has ‘fallen on hard times’. In truth, she is not enamoured with the Italian media, which has ‘not adapted to the internet’. Broadcast journalists eschew the possibility of objective reportage: ‘they like to hear their own voices’. To attempt objectivity, fact-checking is essential. ‘You have to be careful’ (or you will elicit) strong reactions: you walk a ‘tightrope’.

Recipient of a Fulbright scholarship, Sylvia went onto become an editor at ANSA, the English language Italian news site, for 15 years, where she provided in-depth reports on immigration, Islam, the rise of the right in Europe, and the wars. Her passion for journalism was born through her parents’ strong anti-fascist sentiments. She feels fortunate to be a part of two worlds, America and Italy, and sees herself as a citizen of the world.