A toast to Renaissance Glitter and Gleam

An evening at the Museo de’ Medici with Wine tasting & Apericena

Friday 1 April, WIN members and guests were treated to a private tour of Florence’s Museo de’ Medici, showcasing the history of the Medici family. Over thirty of us viewed a collection of original works of art including costumes, portraits and engravings of the Grand Dukes, sculptures, bronzes, medals, drawings, and pastels. Original documents included an ominous announcement of the Plague, printed books, manuscripts, and autographed Medici letters. 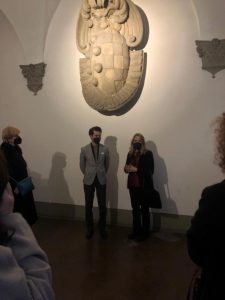 The Museo de’ Medici, located in the stately Palazzo Sforza Almeni on Via di Servi, was confiscated from Florentine Baccio Valori by Cosimo I de’ Medici in the mid 16th century, as residence for his secretary and minister, Sforza Almeni. The rooms of the piano nobile were decorated by Giorgio Vasari.

Our evening began with short guided tours of collection highlights by WIN members Jane Nyhan and Liz Wicks. We saw the large stone double coat of arms crest, representing the union of Eleanora of Toledo of Spain with the Medici’s Cosimo I of Italy and admired numerous bejewelled brocade and velvet costumes, which kept female wearers thoroughly trussed and stuffed in a Renaissance version of what we now call ‘eye-candy’.

And speaking of eating, we munched on a selection of Renaissance savories and sweets from Medici recipes (including a spicy celery ball and scrummy gingerbread). Wine tasting offered four different Medici-related wines.