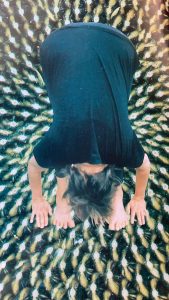 Surya Namaskar is Sanskrit for the Sun Salutation. Surya means sun and Nasaskar indicates a reverent salute. It is composed of a series of positions to thank or pray to the sun or light (or to the Highest).

This is probably the most loved, well-known, and practiced series of all the asanas in Yoga. It appeals to everyone whether it is a spiritual revery or simply a beneficial physical exercise.

Traditionally it is done at dawn. When I was in Varanas, India practicing at the banks of the sacred Ganges, it was a moving experience because it became a deeply devotional practice in which I thanked the sun and being able to receive the fresh morning energy and light. However, this exercise can be practiced anywhere and at any time during the day or even in the evening.

One reason it “fits” every type of Yoga is that it can be a sort of meditation or simply a gymnastic exercise. It moves the body through 12 different movements which also stand for the months of the year but also in Sanskrit have a different word for each month to indicate the different power of the sun in that month. 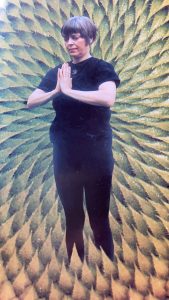 There is no question that moving the body in this way creates flexibility, improves breathing, calms nerves, and stretches the muscles. Furthermore, many internal organs are massaged. Health is restored and one feels a sense of well-being when practiced regularly. Some people go through life practicing only this pose.

Surya Namaskar has been passed down through the centuries having deep ancient roots, enduring the test of time.

Now that you have learned more about the Sun Salutation, do you really think you want to skip this opportunity to learn it or practice it once again with Lisa and me.? It will only take an hour and a half!